“Everything that is profound loves the mask.”

(Friedrich Nietzsche, Beyond Good and Evil)

What can be explained with words, has no need of art. An artist should try to express contents that cannot be comprehensively described. In my view, the work of art should always have something of the indefinite or the inexplicable about it, and for this reason, when I am working, I force myself not delve into understanding the meaning of each and every aspect. That which I perceive in myself, without any precise definition, is already living within me, and in a nutshell, is the being of the work of art to come.

My art springs from an inner necessity: through art, I want to express contact with both real life experience and a vague and blurred consciousness of eternity. I have always been fascinated with matters concerning the relationship between art and life, although I have not yet been able to find a clear-cut answer to a question that I consider crucial: through art, do I actually find or do I simply express my deep contact with life and with myself? Do I find this link before creating, or while working

As an artist, I consider myself to be a medium, not so much between the viewer and the work, but rather between the high and the low, between spirit and matter, between the mysterious source of inspiration and the finished work. I do not mean by actually imposing myself between the observer and the object, but rather to arouse a discovery, a sort of rapture. For me, the work does not mean representation, but rather manifestation, an epiphany. By painting, and especially with watercolors, I would like to evoke, evoke, evoke. I want to create a space where the picture is expanded to such an extent that it becomes the very place of the viewer, thereby nullifying the distance between the artwork and the viewer: this is something that I have experienced first hand in front of Monet’s Water Lilies, when I experienced the feeling of “entering”, not just emotionally but almost physically, into the painting.

My art appears when thought is abandoned and my will is set aside: when the Ego is switched off, it ceases to be alert and stops guiding my hand. I consider the artist in “shamanic” terms, so to speak, and art as a kind of invisible bridging (and therefore universal), because it connects the above and below, heaven and earth. In this sense, I have been deeply influenced by the lessons of Kandinsky on the prophetic power of art, aimed at spiritual awakening and seeking interiority.

I am also very intrigued by knowledge that allows me to gain a higher degree of self-awareness and psychological, physiological, and corporeal sensitivity. I am also fascinated by the rare but intense moments of dialogue and respectful comparisons of religious or philosophical wisdom, especially Eastern, and the most advanced developments of Western exact sciences, in particular the theory of relativity and quantum and subatomic physics, while not yet having a thorough knowledge of them. In this sense, a “historic” meeting between Jiddu Krishnamurti and David Bohm has had a fundamental importance for me: as one of the points of the maximum closeness of spirituality and science, as well as perhaps the acme in twentieth century of this comparison.

My first masks date back to 1997 and in a certain sense, arose from mud, that dark and formless matter of deep suffering, which I later had the opportunity and time to dilute, (thanks to the liquidity and transparency of watercolors) and bring to the surface… the bright white surface of the paper. Therefore, initially, they were “masks of pain”, which in their exorcising vocation have an affinity with Goya’s Las negras pinturas. However, the intimate reworking of this experience of mine has become spontaneously interwoven with and superimposed on more theoretical reflections on the essence of painting. Both the archaic figure of the spiral (especially Mario Merz’s interpretation of it), with its double movement of slow and expansive distension and its swift swirling concentration, and the image of the well, dark, silent, and deep, and thus the archetype of fear, anxiety, and mystery, have held an enduring attraction for me and have then flowed into the circular structure of my latest works. The attribute of fluidity, present in the well and in the spiral, has a fundamental importance for me, as it best expresses the indefinite and the invisibility of eternal things, namely the Essence.

Not only my choice of using watercolors depends on this, but also the use of glazing and having momentarily opted to use canvas rather than paper. The motif of the image that appears and disappears, but above all, the unexpected permanence of a figure on the sheet of paper according to an inscrutable logic, was a revealing discovery for me because now it coincided with the spiritual and artistic quest of the true face, the authentic face. 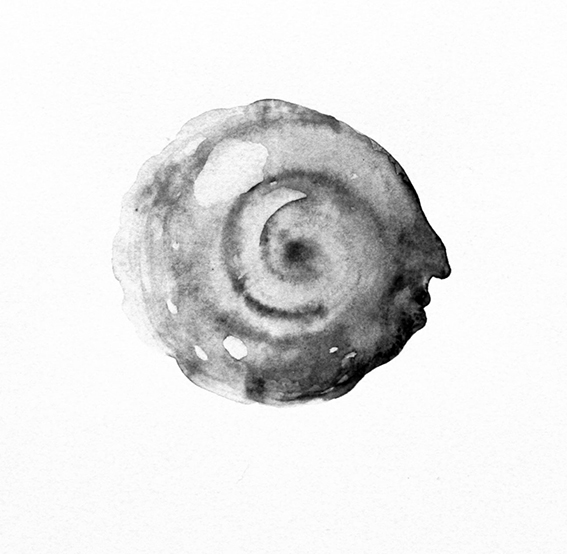 Thus, a black circle in the middle of the square white sheet of paper: it is a dark pit in which to look and continuously question, but it is also a mask, a face. My having been influenced by the Suprematism of Malevič can clearly be seen in terms of composition, but which I have then subjected to a psychological and figurative reinterpretation. The search for the original face, in fact, it is also a meditation on the authentic self. The masks are perhaps the faces that I see on the street, fake faces, real faces, hypocritical, miserable, conditioned, enslaved, fearful, and suffering faces. So what are these faces that I paint? Masks, diaphragms, simulacra, boundaries? What is the ultimate reality of the human being: what remains after all the masks have fallen? 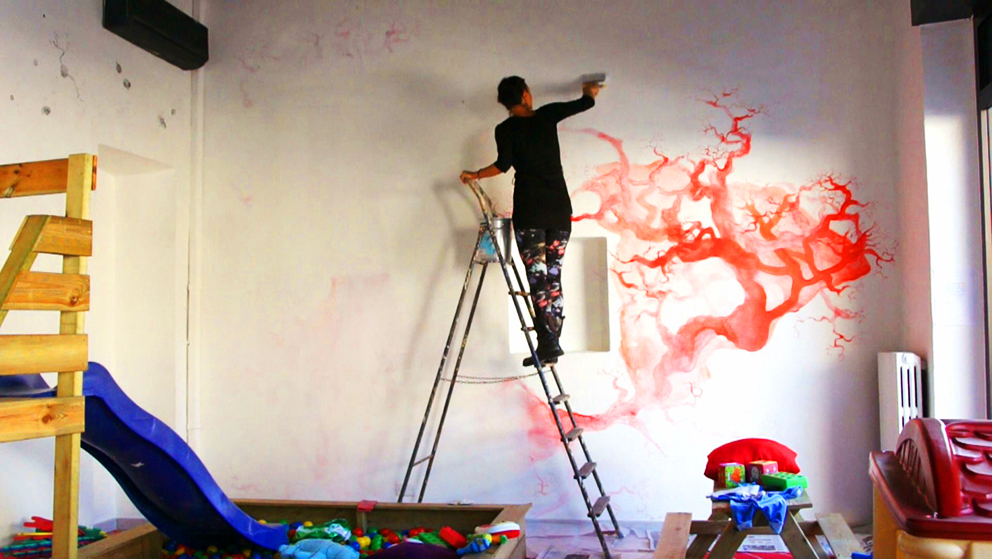 When Alessandro Bulgini involved me in the B. a.r. l.u. i.g. i. project, I immediately thought about the positive aspects of the initiative and its social impact: the revival of the city’s peripheral areas, a meeting of the “sacred” space of art and the “profane” space of commerce, etc.. I was especially attracted by the opportunity to exhibit my work in a place that was not a gallery, and for a different audience than the kind that usually attends exhibitions or museums, but which enjoys art naturally, and where a “sense of meaning” is added by using existing spaces and resources.

In a first phase, I exhibited a watercolor made in 2012 entitled My Red Phlegethon Will Get You All, a large work on paper with great visual impact. I continued working on it, using the wall of the bar as an “extension”, as a support for developing the theme painted on paper. And at that point, I realized that working in such a space was not like working in the studio, where you are isolated, alone, and where everything is neat, and you can focus and work at your own pace. Whereas in the bar, you have to paint in a place that is open to the public, with the typical sounds of a popular and lively place, but one which is also messy and chaotic, full of unexpected occurrences, interruptions, and with a games room for children who are yelling, laughing, crying, and so on. All of this meant I found myself in a very authentic and lively situation, with managers and patrons who candidly expressed their judgments on what I was doing. It also became a “methodological” challenge for me and I began to enjoy its advantages: I had a deadline for finishing the job, I went to the bar as if it were my studio, and in the end, after having gone there so often, it had become a familiar place where I felt at home. So I decided to move on to the second phase: I removed the wall paper and I painted all the walls white in order to then make an actual wall painting covering the entire room of the bar. Thus Germination, the work currently found at Barluigi, was created. Standing in front of the white wall, I savored a new creative freedom, without the rigidity and constraints imposed on artists by the current system of art. And I really enjoyed it.

“My Red Phlegethon will get You All”

I would like my shapes and colours to become “geometrical magic”*

*Quoting my 5-year-old daughter when she pretends to be a fairy.

I began working on this painting in 2010, then I gave it up and started working only in black and white for about 2 years.

Now I feel the urgency to use colour once again, I need to merge myself in the triumph of life and passion that only red can give me. Setting some work aside for a while is something I’m used to doing. The painting is still there, waiting for me, as if it were resting while I am living my life. Then, when I will come back to it, I hope I have become a different person. So I will look at it with different eyes and feelings.

I have always wished to make a painting of death with the same fullness and joy as a painting of life representing summer in full bloom.

Now that I am going back to painting in red again and I see that I must lose control to fulfil it without betraying its essence, I must add something slightly unruly to its development. I need to be involved and upset. I need to forget rationality and abandon myself to instinct, not in a vile sense, but as something fresh and free.

A white canvas can be as frightening as the deepest darkness. White canvas can be like a sterile land where nothing can grow. Colours are hidden under this mute white surface, and for me, painting is discovering them like a mystery. I stare at the white canvas until something begins to appear. I choose colour almost by instinct, you could even say by chance (if chance exists), like a ray of sunshine suddenly breaking through a cloudy sky. Everything becomes clear. Colour vibrates more and more vividly onto the white space. It makes its path and leaves its traces.

Red is the most powerful of colours. To me, red represents life, its essence and its deepest fulfilment. Red is spirituality and sensuality to the highest degree. Red is the soul and flesh, it is ardent and pulpy. Red is fire.

Black is the lack of colour, but it is fundamental for making chiaroscuro, for giving shape to things. I need the chiaroscuro to make order of colour inside colour. I once again need to eagerly long for colour.

After having spent a long time painting only in black and white and a grey-scale, I have rediscovered red as a magmatic core of life originating from inside a thick and obscure cave.

Colour is love and desire.

Total red is fulness of life. Colour is an incidental encounter which enchants you forever.

Delacroix’s paintings have always been one of the main sources of inspiration for my artistic research. In his work, colour is so very intense and vivid and resounding.

The only worthy painting is the one which creates a direct encounter with the spirt. It has to shock you like a Delacroix painting does.

Sometimes I dissolve oil or acrylic painting so much that they resemble watercolour. Through overlapping layers of fluid colour, shadows of white emerge. Colour is so delicate that it can even disappear inside the white again. It is simultaneously the most fragile and the most powerful medium for making the invisible visible.